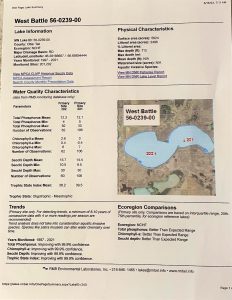 What Was That Ugly Yellow Green Scum on The Lake Last May?

Here is their Initial Response: We looked at the sample and did not see anything in there resembling algae.  Jerry Horgen forwarded Michael Smith’s pictures and water sample to our Aquatic Plant Management Program Specialist and he thinks it’s pollen concentrated by the wind.  He has seen similar scenes in other lakes during his inspections. 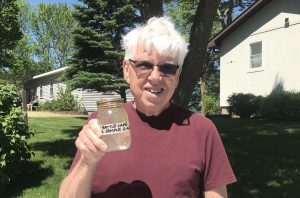 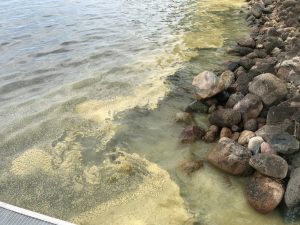 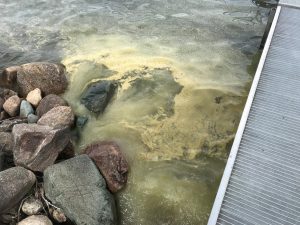 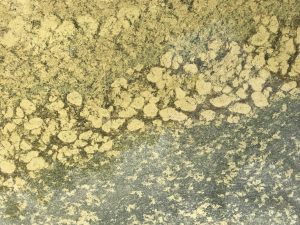 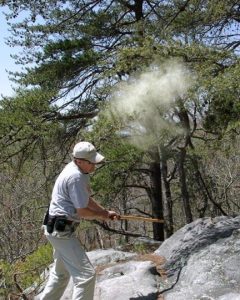 The Yellowish Green Dust in West Battle Lake may be pine pollen from the male trees. Photo is of a researcher whacking a pine tree and you see the pollen dust fly
——
As you possibly may know, the yellow dust covering everything that doesn’t move in early spring is pine pollen. Pine trees produce large (very large) amounts of pollen each spring in order to ensure that the seeds get fertilized and the species can survive. You may not know this, but pine trees have both male and female pine cones. The male cones are usually smaller and often not even noticed, but the pollen that they produce is. So, if your car is yellow, blame it on male pine tree cones 🙂
———————————————- 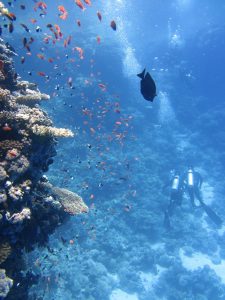 West Battle Lake Continues to Get Much Clearer

31 Feet Clarity on West Battle Lake in Early May!

What is the Cause?

Bob Perry, Water Sampler for West Battle Lake has indicated a dramatic increase in our water clarity on West Battle Lake and John Hofflander, Secchi Disc Reader observed an increase as well.   It’s due to zebra mussels being in our lake for four years.  The water clarity, normally around 15.5 feet has increased to around 28 feet.   I asked an Aquatic Ecologist from RMB Labs to answer the question as to “Why?”  Elliie Kriese responded (Click on Link Below).  Jerry Horgen also contacted Shannon Martin, the person who is in charge of water clarity (CLMP Program) at the Minnesota Pollution Control Agency and she indicated that the “increase” was normal with zebra mussels.  There is no cure for zebra mussels at this time.  The Minnesota Aquatic Invasive Species Research Center at the University of Minnesota is seeking to address this threat that is happening around the state of Minnesota.  What is strange is that The Chippewa Valley Economic Research Group of Wisconsin published a study in 2016 entitled “The Impact of Water Clarity on Home Prices in Northwest Wisconsin” which indicated in its “Executive Summary” an actual increase in property values occurred due to water clarity. 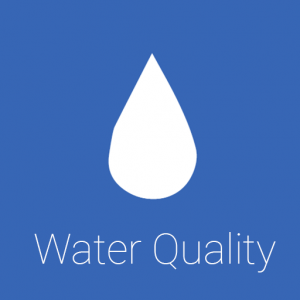 Secchi disk: The secchi disk is a measure of water clarity. The standard secchi disk is a 8 inch diameter metal plate that is painted with an alternating white and black color pattern. The disk is lowered into the water until it disappears from view. The depth at which the disk can no longer be seen is the secchi depth that is recorded. Secchi disk readings can vary by season with the clearest water generally occurring in the spring, shortly after ice-out. Measurements are usually taken in the summer at the same time the fish sampling is occurring.

We typically get algae bloom that progresses as the summer heats up the water.  Imagine 200 years ago there were very few inhabitants on the shores of our lake so it is very important that we encourage everyone to minimize anything that could drain into our lake, for example the remains of fires burned too close to the lake, anything that could impact our water quality.

What Lake Owners Can Do to Aid Lake Water Quality 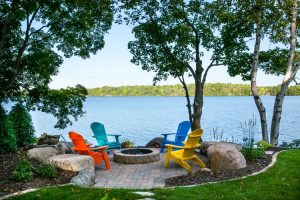